Now back in the good old UK, I’m finally getting some time to update the blog posts on Sierra Leone… wishful thinking on my part about the available time I had leading up to and during the trip that I’d blog as I went along!

So following on from the last post… we arrived at our respective hotels, had time to check out our rooms and the facilities… and in my case scour the place for cockroaches… I have hated those things with a passion ever since an unfortunate incident in a NAAFI back in the Army days… *shudder*… luckily none were found… and then it was straight into the programme that Street Child had organised for us.

Because while we were there to run a marathon (or half), the whole reason for doing so is to raise funds for the Charity, and as we had arrived a few days before the run in order to acclimatise to the heat and humidity, this meant that we were able to visit projects over three different days and actually get to see, at ground level, precisely where all the fundraising money is going… to whom… and to see the impact that it has… or rather that should read, that WE are having… on other people’s lives.  Yes Sierra Leone may be a long long way away and after donations have (hopefully) poured in, most people may not think about the money they have given… but the effects of those donations are going to be felt for years to come… everything we do ripples out and affects another… and so on!

Anyway, the Programme!  First up lunch… always a good thing especially for someone who loves their food as much as me (it’s not greedy, it’s having a healthy appetite!) and a chance to start to get to know your fellow runners!  I’d luckily already been chatting at the airport to a lovely lady called Helen whose son works for Street Child and who, at that point, I had no idea how much she was going to change my run. More on that in a later post!

Then the first Project.  This one was to a place called Lunsar where we visited a school and were treated to singing by the students. 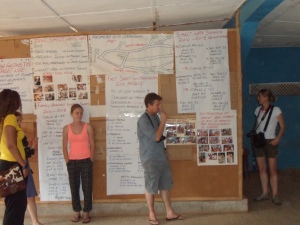 It was here that I first started to understand not just the immensity of how hard it is to effect change in a country which has nothing, which has such scars embedded deep within it’s psyche but to appreciate just how organic, holistic and sustaining an approach Street Child are adopting with their work.  It’s not just a case of take a child off the streets and put them into education… they build schools, they support and pay for teachers, they teach and support families not just financially (for a set period of time) but help them learn to save, to build new businesses… they help them to help themselves!

It was then football time… it seems that it doesn’t matter where you go in the world… football reigns supreme! And Manchester… although to be fair, that seemed to be quite evenly divided between City and United! I do believe one of the lads decided to play without shoes on… with the result that his feet were pretty cut up, though that didn’t stop him from running the marathon a couple of days later! 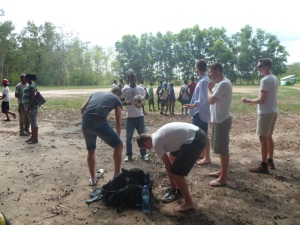 and in the meantime the rest of us chatted and had our photo taken with some students, and one lady had a bit of a dance with some of the young girls – I don’t generally dance in public in daylight, without the aid of alcohol… so didn’t actually have the nerve to join in, wish I had now!

What an experience and what a start to our Sierra Leone visit… a very long day… flying through the night, no sleep… but oh so worth it… and that was just the first day!

(My friend Ski with the children and their important message)

And while the trip may be over, my fundraising page is still open for anyone that would like to contribute – see the links below!!!

This entry was posted on Wednesday, June 5th, 2013 at 11:30 pm and is filed under Sierra Leone Marathon 2013 - #SLM13. You can follow any responses to this entry through the RSS 2.0 feed. You can leave a response, or trackback from your own site.