So a brief post about the third and last project… after all, we still had a race to run, had landed only a couple of days before and the majority of us were due to then return home in a couple more days… talk about packing a lot in!

This visit was firstly to the main Project Centre in Makeni:

then disbursing into smaller groups and actually going out into the local community and visiting people who had their own businesses, thanks to help from Street Child. What is important to note here, is that Street Child supports, assists and teaches everyday people how to create a sustainable business, instigate small savings plans at the same time as reintegrating the street children back into those families… until a certain point when the Charity can then step back and those helped have reached a stage of self-sufficiency. Street Child are helping people help themselves and once that is done, they gone on and help others… such influence rippling out as I mentioned before… which will positively affect generations to come! 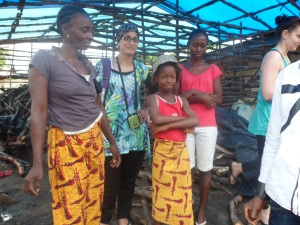 Here, we’d gone out to visit two businesses: the one above featuring a mad marathoner (more on her in later posts – bad influence, bad! *grin*) was with a local lady who collected firewood and sold it on, who was helping support her family, and her sister’s family if I remember correctly, and keep the girls in education and while as shy as a lot of the other kids, the two little ladies above chatted to us about what their lives were like and how proud they were of their family for helping each other. An ethos a lot of people could do with adopting!

We then headed back to the Project Centre where some surf shorts were handed out: one of the marathoners was from New Zealand and had brought a load over, and I’ve never seen anything like it. The street kids are allowed into the Centre but obviously the Centre is not there to feed the town’s children, nor would it be able to. But they do what they can, with what they have. So when you have kids with nothing, absolutely nothing… and boxes of shorts are being handed out… there’s gonna be a melee… it was actually a heartbreaking sight… to see children so desperate for a pair of shorts that was likely too big for them… and how proud they were of having something new and clean to wear… it’s not the same as watching it on a tv, reading about it in a paper… you’re totally disassociated from the experience that way… it’s not “real”… here, to see it, in front of your own eyes, mere steps away… heartbreaking!

And then lunch… Street Child did a fantastic job of catering for us… the food was included in the package price… no-one got sick… well Reece did have some salad on the last day and was very queasy on the plane home, but then again that could have been his Freetown hotel… anyway… lunch! We lined up, got our food, found somewhere to sit and ate. Surrounded by kids that hadn’t probably eaten what we would call “proper” meals for… well, God only knows! And they came and sat by us, behind us… and still I didn’t twig!

One of the guys didn’t finish his lunch so passed his plate back to the kids… who promptly grabbed it off him (with thank you’s I hasten to add)… and of course when I finished and had food left on my plate, I didn’t pass it back quickly enough… with the consequence I was mobbed and food went everywhere… mainly over me! Sure there’s some photos out there somewhere of me brushing rather a lot of food off me… and what a waste, because it meant it ended up scattered. So when you remember being told as a kid to eat all your food because some kid in the world would die for what you’re throwing away… it’s true. I’ve been there, I’ve seen it… and it is not pleasant to witness.

Next post up… the running part of the trip!

This entry was posted on Saturday, July 6th, 2013 at 12:40 pm and is filed under Sierra Leone Marathon 2013 - #SLM13. You can follow any responses to this entry through the RSS 2.0 feed. You can leave a response, or trackback from your own site.