So we’d had the project visits, been in Sierra Leone a few days, met new people and made new friends… and the other thing we all had in common was we’d flown over to run!

Now… my original plan had been to train up for and do the half-marathon… given I had done nothing really before but one treadmill run a week, pretty much died after 20 minutes max on said treadmill and had pushed myself to get out of the house and run on my own over several months (also thanks to Niron from ActivatePlus PT, because his personal training also gave me a kick up the ass!)… and I’d managed 12 miles non-stop by this point. Admittedly I had died with the legs refusing to move after that particular run… but I’d trained for it and had a positive mental attitude…

and then I met the mad marathoners on a bus in a Sierra Leone… most specifically the first bad influence… a certain Mr Downey… all 6 foot 3 or 4 of him who I think has been running for decades and has a “can do” attitude (helpful that when you work in the City)… and who it turns out, only lives about 10 minutes away from me… small world!

Now Kev, remember at this point, I’m using a good photo of you… I do have another I could have used hahaha… anyway… it was at this point, that the words were uttered “well you could change your mind and do the full marathon”… several times… which I then considered. Apparently I then got a bit of a glint in my eye! But he was right. Nothing like a bit of logic. Run the half distance… and walk the rest if necessary. It was “DO-ABLE”. And so the seed was planted… which wasn’t helped by the fact that we all then kept discussing the possibility over the next couple of days!

Now, you’d think you’d need to rest your legs and acclimatise… given this is Sierra Leone, it’s bloody hot… and humid as hell. So the second evening (which must have been after the Bumbuna visit) I ended up going out for a little 2 mile run to see how it felt running in the heat… not on my own… this was with a total marathon nutter who’s been running decades (there were a few in attendance, obviously) who should reach his 30th marathon by the end of …. actually next week if you count Race to the Stones ultra… anyway, our rooms were right opposite each other and Jon was very helpful with advice… oh yes, here he is with said earlier bad influence! 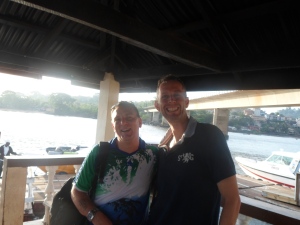 So that little run went well, nice and slow and able to breathe, but it was early evening… so… we ended up on the Saturday… yes, the day before the Marathon itself, going out at lunchtime in 88 degree heat, high humidity and running a 10km. We took it slow and careful and it was on the road. Very hot. And bearing in mind I had had an injury kick in around week 8 of my training, I felt it.

So that was that. I decided to stick with what I’d trained for, do the half marathon and be a happy bunny if I could complete it. Realistic goals. Even Kev looked a little relieved that night at the pre-race party when I went to get my t-shirt and race number… I definitely heard him mutter the words heat, death and conscience! I also double-checked with the Race Director who also advised against such a plan.

BUT… when you’re surrounded by high achieving types, who love nothing more than a challenge… when a certain Army major who shall remain nameless (ok, recently demobbed but still… yes Chez I mean you… oops) turns round and tells you not to be a pussy even if you were only military admin many decades ago… and THEN you meet another nutter and bad influence… yes Helen, I’m naming and shaming you… who says that they will stay with you, and walk the whole way if necessary, that it would be safe and therefore do-able… what can you do but just go for it!!! 🙂 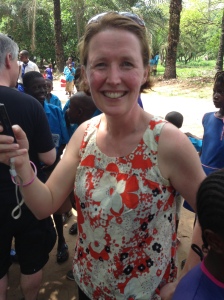 Trust me, she may look innocent but she’s not… especially where sambuca, dancing in London and almost missing my train home is concerned… but that’s another story! So anyway, what could I do but check to see if I could change my choice. And I could. So I did. Plan adopted. Run the half, walk the rest if necessary. Stay in group, do not go on own. And try to get an early night.

After a couple of hours sleep (4 actually, that was better than some got) and with full marathon race number pinned on… it was time to get on the coaches, get to the start line and see just how my legs would cope. There was an absolutely fantastic atmosphere there… loads of local people also turned up to participate, especially in the 5K race… likely helped by the fact that the President of Sierra Leone was also running it… and before you knew it, we had assembled, the President had opened the race and it was time to start! Here’s a few of the crazy participants before we lined up at the start…

I was good. I stuck with the mad Geordie (aka Helen) and her group… until Paul decided (very wisely due to injuries) to stick with his half marathon plan and took the turning (I think around mile 6) and then Helen (yes, see earlier photo above) wanted to stop to take some photos of the kids who had high-5’d us… she said she’d catch me up so off I trotted alone (and trust me, trotting was the pace I adopted)… yes yes, I know I was supposed to stay with the Group, but I didn’t want to stop…

and from then on in it was a case of maintain pace and chat to people as either I reached them, or they passed me… but mainly I was running on my own… stop shaking your head Helen… you know you’ve forgiven me ;)… we were lucky that it was a bit cooler due to the early start and it wasn’t too hilly at that point… there were also lots of local people encouraging us in the early stages… and then we hit the quieter village back roads… or hills… the word “undulating” has taken on a whole new meaning… and by mile 11 I had to adopt a walk/trot tactic… power walk up those undulations and jog down… trust me, the energy expended trying to run up them would have killed me quicker than the heat!… and so I plodded on, finally reaching the turn back point and then the half marathon point just under my hoped for time of 2 hours 30.

Now that felt amazing, and when my runkeeper app kicked in and I knew I’d achieved it, it was quite an emotional moment! Anything hereafter would be a bonus… just needed to keep going… especially as it got hotter and the trail became narrower and more uneven… there was only one point I realised quite how serious everyone’s concerns were, and that’s when I saw one guy go down with heatstroke. They got him out and he’s ok, but I guess I hadn’t really been aware of just how dangerous high temps and humidity can be… so if anyone considers doing what I did, get some expert advice first and follow it *ahem*!

Now I’m not sure what everyone means by “hitting the wall” but I do know my quads kicked in around mile 20… not surprising given the problems I’d had since week 8 of training, but I was actually pleased… that’s not as crazy as it sounds. You see I’d also been running in custom orthotics, which had helped create the leg problems, and then the moldable orthotics I got, got fried so I was actually running in trainers that were only two weeks old with minimum mileage used, and brand new orthotics I bought and moulded the day before I flew out to Africa. Not exactly the best marathon plan in the world huh! So, the quad pain meant the orthotics were working properly and my legs/hips were actually balanced as I ran (trotted)… anyway, I pushed on and was still trotting & walking at the end and even managed a little sprint for the last 50 metres… well it felt like a sprint, thankfully I have seen no photo or video evidence to prove it was more like a slow motion pace! And looking at my timing splits afterwards… my overall average pace per mile had only dropped by 1 minute (for a newbie, I thought that was great) which included the extra walking!

All in all, I finished the marathon with a time of 5 hours 10 minutes and 55 seconds … certainly didn’t feel like eating afterwards (but didn’t throw up)… and the legs were walking very woodenly until I got back to the hotel and had a shower. The next day, yep like a few people I had a couple of nasty-ish blisters, black toenails and one which came off… I ached a bit… but to be honest I’d had worse from a hard karate session… which showed that I’d listened to my body properly, adopted the right tactics for me and had taken it carefully and not pushed too much, especially given my lack of running experience. I did find it hard to rein back at the beginning when a lot of people raced off, but to me safety is key.

I loved it… and since I trained for the half… there just happened to be a half marathon two weeks later in the town I live… what could I do but go for it! So in the space of two weeks, I’d done a full marathon in Africa, a half marathon in Essex and a 5k in Essex… all personal bests obviously… with more to come… but you’ll have to venture back to read about those… especially a new challenge I’m creating with one of the mad marathoners I’ve mentioned previously.

If something is do-able then why not go ahead and challenge yourself, because life is just too short to do anything other than live it to the full… appreciate what you have, enjoy what you have… and if you are not in that situation, then it is down to you to change it, no-one else. The responsibility for your life, is yours alone. What can you do with yours and just what can you inspire others to achieve through your actions?

This entry was posted on Sunday, July 7th, 2013 at 11:11 am and is filed under Sierra Leone Marathon 2013 - #SLM13. You can follow any responses to this entry through the RSS 2.0 feed. You can leave a response, or trackback from your own site.