Domestic abuse / violence is a topic that is not talked about easily.  It is easily hidden away because most people do not want to acknowledge the existence of it, don’t want the subject to touch their lives and also because once you know about something, there is then a choice about whether to do something about that new knowledge.  Such choice automatically then leads to responsibility.  Who wants to take responsibility for reporting domestic abuse? Who wants to get involved in that? The answer is generally a big fat no, with such inaction then lending more power to the abuser, because they get away with so much more, feel safe in the knowledge that they won’t be stopped and actually, if no-one ever does anything, it sends the implicit message that it is allowed.  Yes, you read that right… by not doing anything about it (or sitting on the fence as it were) if you know about it, do nothing about it, then you’re saying it’s ok.

But if you know abuse is happening and want to help someone, what do you do? Who do you turn to? What help is available? If you don’t know the answers to such questions, that too can stop victims getting help.  So the aim of running these challenges is not only to raise funds (which are desperately needed) but also to raise awareness of this topic.

Therefore, the charity that I chose was Refuge. 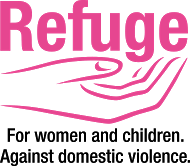 Although I have a full time job in the City, I am also a qualified Counsellor.  I work in private practice with clients, with whatever issues they bring (from self-esteem, relationships, body image, negative thought patterns, generational patterns and more) and additionally as a volunteer with a local domestic abuse charity.  Please note that this is not Refuge.

Refuge opened the world’s first safe house for women and children escaping domestic violence in Chiswick, West London, in 1971 and have been providing help to those who need help to escape. As Government funding is not enough to sustain the demands that Refuge faces… and let’s face it, demands that shouldn’t be necessary in any day and age!… it relies on help from volunteers and donations to meet those demands… demands that ultimately means lives are saved!  Ways that they get such help is through challenges and events, such as running… which helps to raise much needed funds and helps to get the message out about what domestic violence / abuse means and can entail, and it was one such event that brought me into contact with them.

That event was the Virgin London Marathon and the first of the Triple Continent Challenge.  Now some friends (who aren’t runners) thought that because I’d already completed a long race by this point, figured it would be easy. That was, until I pointed out I wanted to run the whole way… and in a much quicker time. Specifically to shave at least half an hour off my time, or more if it was possible. But predominantly to do this without stopping, with all the niggles that I had had to date and the fact I hadn’t run more than 13.1 miles non-stop. I hadn’t figured on the amount of people running it either until someone pointed that out.

And it was at this point that I knew I needed help. Professional help (yeah yeah I can hear some of those friends’ voices laughing at that…) because it’s one thing to actually go and totter off down a trail marathon (or ultra) with a lot of walking (and pain, which kinda goes without saying) as a one-off, it’s quite another to specifically train for and run a road marathon… one of the world majors… with virtually no proper training experience, especially if you’ve had quite extensive hip surgery some years previously which meant spending about 3 months on crutches.

Life is somewhat synchronistic because I eventually, through a recent running connection, found myself making a visit to that person’s coach to see if they could help me. That initial session was more like an interview… and it wasn’t me in the driving seat! What did I want to achieve, what training and experience did I already have… and what time did I have to put into training going forwards. Looking back, it still makes me chuckle a bit to remember Rich’s face when I told him what I’d already signed up for, what little experience I had and how I had no readily available time to devote to training. He told me he didn’t think he could train me. He’s blunt like that 🙂

However, when you really want something… ultimately, you will do what you have to do to get it… and when he told me that, apart from feeling pretty gutted for a little while… my answer was: tell me what you want from me and I will tell you if I can do it!  A day later I got an email. And nearly died in horror, wondering how on earth I’d fit one run in, let alone five… plus a coaching session, plus two conditioning sessions… all in one week, every week, plus daily stretching… plus work, college, commuting, second job, building my own business… well, you can imagine…

and so the training began, choices and sacrifices made…

until 6 months later I ended up on the start line of the London Marathon… well actually, I was in a pen… near the back which took about 10 minutes to reach the start line once the race began… but off I trotted, with one of my friends from Sierra Leone beside me…

and yes it hurt, especially the last few miles (not as much as when I stopped after I crossed the finish line though… little tip… do not sit down on the grass, you will end up being helped up by the Red Cross if you are not able to pull yourself up by holding onto a nearby tree!)…

and I did it quicker! Not too shabby a time if I do say so myself 🙂

It’s amazing what you can achieve when you set your mind to it… but the thing is, you have to be open to the possibility… to know and be able to reach out to those that can help you. My coach Rich was amazing in helping me get to that point, he’s even more amazing for putting up with me since, or maybe that’s the wrong way round 😀 … of course, we had to get over the little thing first about how he thinks I’m absolutely nuts to even consider doing one stage run, let alone two… and let alone so close together… and that’s not normally how he works… what’s that saying Rich, it takes one to know one 😉 … anyway…

I’m still fundraising for Refuge with these runs, so if you would (hopefully) like to sponsor me for being crazy enough to attempt this challenge… to help Refuge help others, please click on my justgiving link where you can donate online:

and if you would like to find out more about Refuge and the work it does, please click here.

And of course if you have ever fancied running or jogging/walking a marathon to help a fantastic charity, then please get in touch with Refuge to see about getting one of their bond places!

I’m flying out very shortly to start the second challenge in Madagascar, so will blog the next post when I can.

Many thanks for taking the time to read this, and please do spread awareness of what domestic violence / abuse constitutes and how people can reach out and get help.

Have a great day 🙂
Michelle

This entry was posted on Tuesday, August 26th, 2014 at 9:01 am and is filed under Challenges, Charitable Organisations. You can follow any responses to this entry through the RSS 2.0 feed. You can leave a response, or trackback from your own site.