Life has been so hectic that I’ve not really had enough spare time to just sit down and post about the last part of my Triple Continent Challenge.

Last, but by no means least!

Mostly this was due to the fact that after Madagascar, I had such little time between the two events… 15 days from finish line in Madagascar to start line at the edge of the North Rim of the Grand Canyon, and that was to include work, flying time as well as a couple of days acclimatisation in Kanab, Utah. So, how to sum up such an Adventure?

Some words and phrases I associate with Grand2Grand or g2g as it’s more commonly known:

The premise, 273km from the North Rim of the Grand Canyon up to the Grand Staircase, carrying everything you need for the week in a pack on your back. When I signed up I didn’t have much knowledge as to what ultrarunners did… I thought they all did these stage races, so why not do two. How hard could it be? I really must learn not to ask that question in future! The answer is usually: A LOT!

A group of us who had met up previously, gathered at the Airport and celebrated the start of this journey with a few glasses of champagne: not your usual liquid of choice for hydration but it worked just fine at that point 🙂

Of course, runners adapt when a sudden dash onto the plane is needed and the bottle isn’t empty… (disclaimer: not naming and shaming, but this isn’t my bottle!)…

On arrival in Kanab, the residents were fantastic: we were not only warmly welcomed but very kindly looked after during the few days we spent there pre-race: a flight over the town (thanks Dave), sports massage (thanks Marilyn) and a visit to a local animal sanctuary – the Best Friends Animal Sanctuary. Now I missed the animal sanctuary visit and really wish I had been able to get there, probably one of only two regrets I have from the trip but I will definitely be visiting the next time I’m in Kanab because the work they do is absolutely amazing. Check out: http://bestfriends.org/ – they are a leader in the no-kill movement and their sanctuary is one of the USA’s largest animal rescue organisations!! 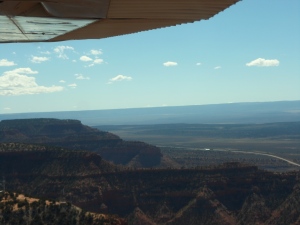 Kit and paperwork checks were completed in Kanab with a fab final meal catered and then the next day it was out to the first camp at the edge of the Grand Canyon. Words do not do the land justice. Pictures do not do it justice. The photos I have from that day show me stood at the edge but they just cannot convey the sheer scale, size and feeling of actually being there. The only way to feel it is to go there!

The feeling of excitement was palpable throughout the camp, from the moment we all arrived in jeeps, to getting our kit organised and space chosen in our tents on that first night, to having a catered last supper right there in the middle of nowhere… absolutely superb!

And then storm clouds appeared… cue a sudden dash for tents!  Luckily it passed as quickly as it arrived but I did wonder if that was a portent of things to come.  Event, course, safety and medical talks were given and then as it darkened it was time to get some sleep.  Until I realised a group of people had converged amid some squeaks… now I had heard there were creepy crawlies… what I hadn’t expected was a huge furry tarantula!  Actually I felt sorry for the poor thing… there it sat on the sandy ground encircled by huge humans shining their headtorches onto it… until it moved and then I scampered back to my tent promptly… double-checking the base of the tent was secured against entry should it, or its’ friends, decide to invade! 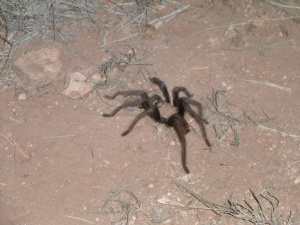 Finally Stateside… and the adventure was about to begin…

Check back to hear how it went!
Michelle

This entry was posted on Sunday, March 22nd, 2015 at 11:21 pm and is filed under Challenges. You can follow any responses to this entry through the RSS 2.0 feed. You can leave a response, or trackback from your own site.