If You Want to Change the World, Love a Man 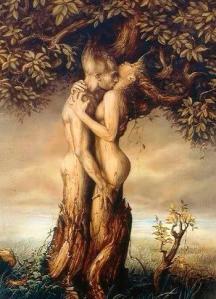 If You Want to Change the World, Love a Man

If you want to change the world, love a man, really love him.
Find the one whose eyes are like blazing suns,
that make you look away the first time,
that pierce right through you,
blinding you to everything but the moment,
melting you into a puddle of soft pastel light,
even though you cringe at the color, pink.

The one who stops your thinking,
who sends your lashes fluttering
and all the blood rushing to your cheeks.
The slow-to-speak-one,
whose smile is like a flute,
who summons honey bee songs,
blossom songs and morning bird songs
with his listening.

The fallen-sky-one with the mark on his back,
where he lost his feathers from flying too close to a star.

The broken one in search of his wings,
who tells you the story of how to make fire.

If you want to change the world, love a man
beyond your fear of being burned.

Beyond unforgiveness and the walls you’ve built
to protect your sovereignity and anonymity.

Love him beyond old wounds and lies
you believed to be truth,
the hole in your heart from an absent father,
the scar on your sacred flower left by thieves.

Beyond past lives and the memory
you keep like a shrine to betrayal
when you fell to your knees in the ashes of your village,
and love became a field of bones.

Lift your darkened face to him who stands before you.
Take his hand and let him raise you to your feet.

Trust him to hold you as you tremble and weep in his arms for all that has been lost and found in this holy instant.

If you want to change the world, love a man
Beyond your faithlessness
and your secret hatred of humanity
Beyond all your judgment and self righteous projection.

The stone on your heart is as ancient
as the thought that you had to deny His existence
to know your power.

You are no less God than you ever were.
Man is no more guilty than Woman is innocent.

Love him for bearing the burden of desire in his sex
so your temple could remain whole unto itself-
for taking on the split aspect of mind
that seemed to abandon the oneness of heaven
so that you might know the joy of Its extension.

Love the ecstatic, primal root
castrated by religion as the root of all evil-
the channel of divine creative impulse-
that sparks the seeds of life, death and birth
from the womb of space and time.

Love the humble guardian and warrior
Man has been to Woman
even as he hunts her,
even in his drive towards self gratification,
which ultimately is the portal to soul union.

Love the violator who holds the mirror
to everything you have disowned within yourself-
so that all your desire, your creative impulse
may be freed
from the chains of separation, lack and guilt
and you can finally trust your Self.

If you want to change the world, love a man
in all his instinctual animal nature,
in all his hunger and devotion to beauty.

Love him beyond your vanity and pridefulness,
your gilded possessiveness and need to special-
beyond your well thought out conditions for safety
and all your concepts of how a man
should be in relationship.

Love him beyond your anger at not getting your way,
beyond your terror of not knowing or being in control.

Love him in his relentless pursuit
to penetrate the deepest sanctuaries within you,
that hold the chaos of your strongest emotions,
your carefully guarded secrets of separation
between light and dark, virgin and whore,
man and woman, spirit and form.

Love him for opening the door to sensuality,
to your primordial self that is beyond duality,
for binding you to pleasure
even as the air closes in around you,
even as you writhe with madness,
cursing your incarnation as the enemy-
even as you contract and claw,
crying out in despair, such joy it brings.

Love him for not yielding
to your resistance to surrender-
for standing in his masculine power
even as you threaten to destroy him.

If you want to change the world, love your man
for leaving you to live his purpose,
whether it’s for a day, a week, months or years.

Love him for breaking his own heart over and over-
for holding the tension and balance
of polarity and intimacy,
of distance and closeness.

Love his need for silence and solace-
for keeping some of his mystery to himself-
not that he has anything to hide,
but so you will always have surprises!

Love his evolutionary nature
that seeks new experiences,
that can never be satisfied-
for his boundless curiosity,
that if allowed to be free
might be your own liberation
from complacency.

Love him for shining independently
from the seat of his own majesty-
for not needing, yet choosing you
from a place of knowing his magnificence.

Love him for being your patient direction and destiny-
for returning to you
your own brightness through the dark night-
for helping you to remember
the one and only relationship you’ve ever had
and tried to forget-
for bringing you to that vulnerable, powerless
abiding place of surrender
you’ve been afraid of and waiting for all your life-
where you can finally be consumed by Love-
where you can finally be claimed by God.

If You Want to Change the World, Love a Woman

If You Want to Change the World, Love a Woman

If you want to change the world… love a woman-really love her.
Find the one who calls to your soul, who doesn’t make sense.
Throw away your check list and put your ear to her heart and listen.
Hear the names, the prayers, the songs of every living thing-
every winged one, every furry and scaled one,
every underground and underwater one, every green and flowering one,
every not yet born and dying one…
Hear their melancholy praises back to the One who gave them life.
If you haven’t heard your own name yet, you haven’t listened long enough.
If your eyes aren’t filled with tears, if you aren’t bowing at her feet,
you haven’t ever grieved having almost lost her.

If you want to change the world… love a woman-one woman
beyond yourself, beyond desire and reason,
beyond your male preferences for youth, beauty and variety
and all your superficial concepts of freedom.
We have given ourselves so many choices
we have forgotten that true liberation
comes from standing in the middle of the soul’s fire
and burning through our resistance to Love.
There is only one Goddess.
Look into Her eyes and see-really see
if she is the one to bring the axe to your head.
If not, walk away. Right now.
Don’t waste time “trying.”
Know that your decision has nothing to do with her
because ultimately it’s not with who,
but when we choose to surrender.

If you want to change the world… love a woman.
Love her for life-beyond your fear of death,
beyond your fear of being manipulated
by the Mother inside your head.
Don’t tell her you’re willing to die for her.
Say you’re willing to LIVE with her,
plant trees with her and watch them grow.
Be her hero by telling her how beautiful she is in her vulnerable majesty,
by helping her to remember every day that she IS Goddess
through your adoration and devotion.

If you want to change the world… love a woman
in all her faces, through all her seasons
and she will heal you of your schizophrenia-
your double-mindedness and half-heartedness
which keeps your Spirit and body separate-
which keeps you alone and always looking outside your Self
for something to make your life worth living.
There will always be another woman.
Soon the new shiny one will become the old dull one
and you’ll grow restless again, trading in women like cars,
trading in the Goddess for the latest object of your desire.
Man doesn’t need any more choices.
What man needs is Woman, the Way of the Feminine,
of Patience and Compassion, non-seeking, non-doing,
of breathing in one place and sinking deep intertwining roots
strong enough to hold the Earth together
while she shakes off the cement and steel from her skin.

If you want to change the world… love a woman, just one woman.
Love and protect her as if she is the last holy vessel.
Love her through her fear of abandonment
which she has been holding for all of humanity.
No, the wound is not hers to heal alone.
No, she is not weak in her codependence.

If you want to change the world… love a woman
all the way through
until she believes you,
until her instincts, her visions, her voice, her art, her passion,
her wildness have returned to her-
until she is a force of love more powerful
than all the political media demons who seek to devalue and destroy her.

If you want to change the world,
lay down your causes, your guns and protest signs.
Lay down your inner war, your righteous anger
and love a woman…
beyond all of your striving for greatness,
beyond your tenacious quest for enlightenment.
The holy grail stands before you
if you would only take her in your arms
and let go of searching for something beyond this intimacy.
What if peace is a dream which can only be re-membered
through the heart of Woman?
What if a man’s love for Woman, the Way of the Feminine
is the key to opening Her heart?

If you want to change the world…love a woman
to the depths of your shadow,
to the highest reaches of your Being,
back to the Garden where you first met her,
to the gateway of the rainbow realm
where you walk through together as Light as One,
to the point of no return,
to the ends and the beginning of a new Earth.